Hubs and I have traveled to a conference last week at Lake Tahoe.  Not the Lake Tahoe that everyone thinks about when they say they are going to Tahoe.  That would be the community of South Lake Tahoe that sits right on the Nevada-California border.

This conference was at the north shore of Lake Tahoe at Incline Village.  While it is still as exorbitant and expensive as the other Tahoe, it does not have quite the level of commercialism that reigns supreme on the south shore.

While we were there, the weather fluctuated from sunny and calm, to downright windy, and even included some snow flurries.  When it’s windy like that, the lake looks more like the ocean than an inland lake at 6200 feet. 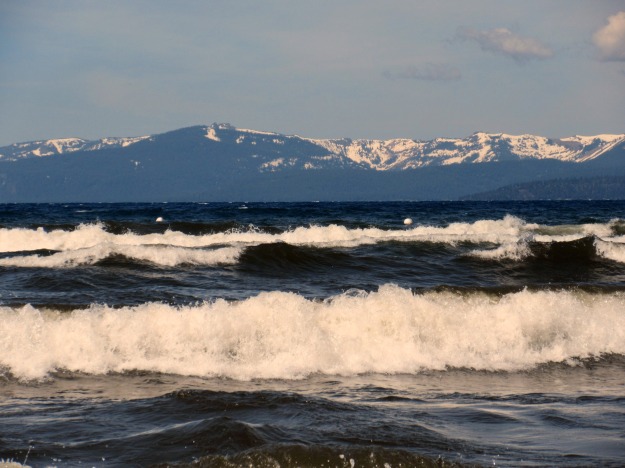 Our stay brought us to the Hyatt Regency Lake Tahoe Resort, Spa and Casino in Incline Village, NV.  We were greeted by these three bears and a glass of champagne.  What could be bad about that?

And the resort has all of the high end amenities you’d expect of a Four Diamond Resort.  Heated pools and hot tubs, fancy schmancy spa, fire pit, gift shop and sports shop, and several restaurants and cafes where I spent too much money and ate too much. And because you are in Nevada, you can also indulge in games of chance in a well-appointed casino, um, and have a cocktail or two (or three) in one of several lounge areas.

I’d have to say that if you are going to hang out with a spouse at a conference, overall, this was not a bad place at which to do it!

13 thoughts on “The Other Tahoe”

In 2011, my husband, Jeremy, and I gave up our lifelong careers and started down the road to reinventing our lifestyle. This is our story.