Prior to the Encore Voyage, it was always rush here, do this, accomplish that, cross things off the list, get very important chores done, GO, GO, GO, RUSH, RUSH, RUSH. The weekends used to be an effort to “catch up” in hope that we would have an easier “normal life” on Monday through Friday.   On more than one occasion, when asked a question by a friend or colleague, I have responded with, “I don’t have time to think about that right now!”

I have discovered that one of the greatest gifts of the Encore Voyage is that yes, in fact,

I DO have time to think about that!

I have had many people ask me if I was afraid of becoming bored.  I know plenty of people who spend their days at home, staring at a television or playing computer games.  Now I’m not saying that I have not occasionally spent some time working on Candy Crush, or playing Words With Friends.  But my friend put a post on Pinterest that summed it up perfectly: 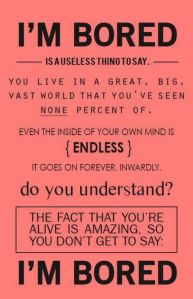 I call it Mental Wandering – It’s the process of letting your mind wander where it may, and then taking note of the things that you think about and the things that interest you; and then taking those thoughts even further and digging into them a bit deeper with intentionality.  It leads you to read new things, study new things, try new things.  From there, who knows what will happen!  Albert Einstein said it best:

“I have no special talents.

I am only
passionately curious.”

Hell, I don’t know the first thing about blogging.  But allowing myself to wander from thought to thought has led me to a whole new universe of information and talented bloggers who are willing to help me learn new things. Now I make a habit of taking the time (no guilt allowed) to just let ideas run where they may, with no mandate to accomplish anything.  Someday I’ll have to tell you about how I learned to knit just because I saw something beautiful!  Or how I learned InDesign because I was curious.  Maybe next I’ll take on Photoshop because you can teach a “not quite old yet” dog new tricks…and this young dog is loving traveling down the mental highway!

2 thoughts on “A Different Way to Travel”

In 2011, my husband, Jeremy, and I gave up our lifelong careers and started down the road to reinventing our lifestyle. This is our story.